Keeping up to date with developments in indirect taxation is a full-time job. Every day seems to bring new indirect taxes, rate changes, and new reporting and compliance obligations. Global businesses must keep track of all these changes — both those that have happened and those that are coming down the line. And they must adapt their indirect tax policies, transactions and accounting processes accordingly to pay and recover the right amount of tax. But knowing what is changing is not always easy.

In response, we are launching our Worldwide Indirect Tax Developments Map on ey.com.

Our interactive map is designed to help you keep abreast of significant changes happening around the world in value-added tax and goods and service tax (VAT/GST), global trade, insurance premium tax (IPT) environmental and excise taxes. The at-a-glance display shows what is happening with brief details about what is changing and where and when each change is taking place.

By filtering the information by jurisdiction, tax type, type of change and date, you can focus on the topics and jurisdictions that matter most to your business. For each entry, a link allows you to read more about the development or to contact an EY tax professional for more detailed guidance. Throughout the year, new items and updates will be clearly marked, so please check back regularly.

We hope you find our new map a useful source of indirect tax information for your business, and we welcome your feedback.

As we launch our first edition of the Worldwide Indirect Tax Developments Map, there are five trends and themes emerging from recent developments in VAT/GST around the world:

1. VAT/GST rates are stabilizing — but they are still high

Since the start of the financial crisis in 2008, worldwide VAT/GST rates have risen rapidly in many jurisdictions, particularly in Europe, reaching an average peak of 21.5% in the EU and 19% in the OECD. That trend has now slowed down and may even be reversing. In 2016–17 so far, there have been fewer VAT/GST and sales tax rate increases worldwide than in previous years, and as economic conditions improve, some jurisdictions are lowering their standard rates. The net effect of the increases and decreases is fairly neutral globally, with the average VAT/GST rates in the EU and the OECD member jurisdictions remaining stable, but it is clear that the upward rate trend which prevailed for several years has now reached a plateau.

Jurisdictions that are now reducing their consumption tax rates or planning to do so include Thailand, which has extended its temporary rate reduction (from 10% to 7%) until September 2017; California, in the United States, which has reduced its sales tax rate to 7.25% (from 7.5%); and Saint Lucia, which has reduced its VAT rate to 12.5% (from 15%). In the European Union (EU), Romania has reduced its rate by 1 percentage point (to 19% from 20%) and Croatia plans to do the same in 2018 (to 24% from 25%). In addition, Peru plans a reduction in its combined standard VAT rate to 17% (from 18%) in July 2017, if certain economic conditions are met at that time. 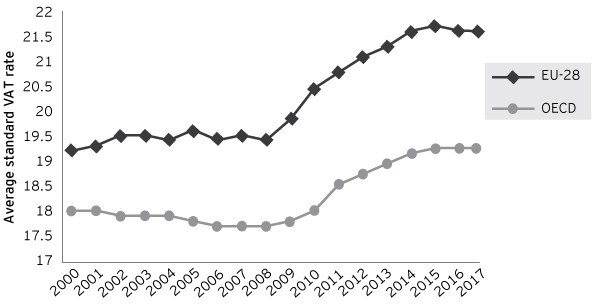 Source: EY based on OECD and EU data

2. Reduced VAT/GST rates and exemptions are making a comeback

Related to the upward-rate trend, in recent years many jurisdictions had broadened their VAT/GST base by removing exemptions and restricting reduced rates. This trend also seems to be slowing down and possibly is reversing. The impact is likely to be a reduction in the overall VAT burden borne by final consumers, even if the headline VAT rate remains high in many countries (e.g., 25% in Sweden and 27% in Hungary).

Jurisdictions that are extending exemptions and reduced rates include China, where exemptions have been introduced for gift vouchers and for services consumed outside China, and a reduction in consumption tax applies to cosmetics products — although consumption tax now applies to luxury cars. In addition, Argentina is applying a reduced VAT rate on supplies of online news services; Azerbaijan has introduced a zero VAT rate for cargo trans-shipment services; Macedonia now applies a reduced rate of 5% on the supply of pellet fuel, pellet stoves and pellet boilers; and Turkey has applied a temporary rate reduction to dwellings (due to end March 2017). In the EU, where standard VAT rates tend to be higher than in other regions, a number of Member States (including Belgium, Croatia, Czech Republic, Hungary, Portugal and Sweden) are applying a reduced rate to a range of goods and services such as buildings, foodstuffs, catering, children’s car seats, repairs and supplies of electricity.

However, not all the movement is toward lower rates: Croatia has removed some goods and services from its reduced rate bands, and Russia’s 2017 VAT changes include the termination of a number of classifications that may lead to changes in the list of goods that are exempt or liable at the reduced rate. And in Tanzania, financial services are no longer exempt.

3. The worldwide spread of VAT/GST continues

Looking at a world map, very few countries do not have a VAT or GST. These multi-stage taxes have spread widely, often replacing single-stage sales taxes, to become the dominant form of consumption taxes. The Bahamas, China, Egypt, Malaysia and Tanzania have all joined the “VAT/GST club” in recent years. And 2017 and 2018 will see further significant progress in this direction, as India and the six member states of the Gulf Cooperation Council (GCC)1 also come on board.

After several years of debate, India has committed to the adoption of a GST (likely to be introduced 1 July 2017) that will replace more than 20 indirect taxes. India’s GST will take into account the country’s federal structure. The proposal is for a dual GST consisting of Central GST (CGST) and State GST (SGST) levied on a common base, with an Integrated GST (IGST) on interstate supplies and imports. CGST and SGST will apply to most supplies of goods and services (although it is understood that power, alcoholic liquor for human consumption, and oil and gas are to be excluded) with a shift to a destination-based tax system for cross-border supplies as opposed to the existing origin-based tax regime. Registration and compliance obligations are to be administered at a state level, with each registration treated as a different taxable person. As a result, many businesses will face new obligations and compliance challenges, including dealing with self-supplies between branches and operations in different states.

In the GCC, the likely introduction date for VAT is 1 January 2018 (at least in some states, although others may delay). Joining the VAT club is a significant step for the region, creating major challenges for governments and companies that have not previously had the obligation to administer and comply with this type of taxation. The broad proposal is to adopt an EU-type VAT model with the GCC as a common economic zone, created by the Member States adopting overarching legislation that allows for limited deviations. However, each GCC Member State will adopt the framework provisions into its own domestic VAT law, so there will be variations. Particular challenges are likely to apply to interstate trade, especially if some GCC Member States introduce the VAT before others are ready to do so. Businesses operating in these states and trading with them must now get ready for the major changes that will result and that will affect every aspect of their operations. The governments and tax administrations of these jurisdictions must also prepare to administer the new regime.

Globalization and the digital revolution are transforming business at a dizzying speed; governments are responding by adapting tax laws and by using technology to collect, analyze and share more taxpayer data than ever before.

This revolution has brought an exponential increase in the provision of goods and services online to non-business customers (B2C transactions) and the creation of online platforms that allow the exchange of a range of goods and services such as taxi rides and accommodation. How to tax this cross-border e-commerce in goods and the supply of electronic services has become a major consideration for tax administrations around the world. If online sales remain untaxed, they pose a threat to domestic economies and VAT/GST revenues by creating distortions of competition and by reducing indirect tax receipts. Not surprisingly, in recent years we have seen a proliferation in legislation in this area, and those developments continue apace.

Examples of recent and upcoming measures related to e-commerce include Belarus (proposed for 1 January 2018), with the introduction of new rules on place of supply of e-services; Belgium (1 August 2016), with the abolition of VAT exemption for online gambling and betting; Italy (26 September 2016), where the tax administration issued clarification about the VAT treatment of online accommodation services; Colombia (1 January 2017), where VAT applies to certain digital services made by overseas suppliers; India (1 December 2016), where tax applies to foreign vendors supplying e-services to non-GST-registered customers; Russia (1 January 2017), with the introduction of new VAT rules for electronic services; Switzerland (1 January 2017), with the introduction of a Swiss VAT liability for certain overseas businesses selling online goods to Swiss customers; Taiwan (7 October 2016), where legislative amendments were drafted to impose business tax on cross-border e-commerce transactions; the United Kingdom (7 November 2016), which introduced regulations that allow the UK tax authority (HMRC) to refuse to register a VAT representative appointed by a non-EU business or to cancel a registration of a VAT representative in certain circumstances as part of a package of measures to tackle VAT evasion by overseas businesses using online marketplaces; and the United States, where a number of states and cities have introduced indirect taxes that apply to the digital economy, including sales by out-of-state vendors.

Around the world, tax administrations are also embracing the digital revolution to administer indirect taxes more effectively by imposing requirements such as the electronic submission of VAT/GST declarations, mandating the use of e-invoicing, and introducing new reporting standards (such as SAF-T) and real-time data collection.

Examples of recent and upcoming measures in this area include Belarus (1 July 2016), which introduced obligatory electronic VAT invoicing; Costa Rica (1 January 2017), which introduced a mandatory electronic voucher system to be used by all taxpayers; Czech Republic (from 1 December 2016 to 1 March 2018), with a phased introduction of the electronic reporting of sales, beginning with accommodation services and food and beverage services; French Polynesia (6 December 2016), which introduced mandatory electronic filing of VAT records; Hungary, taxpayers who file an electronic report relating to domestic and intra-EU transportation of goods by road (EKEAR report) for the first time and who have not filed VAT returns in the past two years, are required to provide a guarantee of 15% of the value of goods transported; Moldova (1 January 2017), where mandatory electronic tax filing applies to entities with more than five employees and for legal professionals; Puerto Rico (27 October 2016), where the Treasury Department issued guidance on new electronic sales and use tax filings; Rwanda (1 October 2016), where an amendment to VAT law increases penalties for noncompliance with the use of electronic billing machines; Spain (1 July 2017), where new requirements for records and VAT books to be submitted electronically will come into force; and Uruguay (19 December 2016), which has extended tax incentives to implement electronic invoicing to 31 December 2017.

Indirect taxes are evolving. Are you?

Tax Insights examines the recent developments in indirect tax and the unique challenges they bring.