Does the speed of change blur or sharpen your focus?

South Korea’s dynamic middle market is surging ahead, EY Growth Barometer 2018 reveals, building on the Republic’s successful strategy of overseas trade to focus exceptional growth ambitions outside its borders. Harnessing a strong technology capability, the country’s company leaders are embedding artificial intelligence (AI) into their innovation strategies, enabled by customer data and staff insights. In common with all the fastest-growth economies this year, lack of working capital is the one significant headwind.

EY commissioned Euromoney Institutional Investor Thought Leadership to undertake an online survey of 2,766 C-suite (60% CEOs, founders or managing directors) in companies from 21 countries and with annual revenues of US$1m-US$3b. The survey was conducted from 15 January-1 March 2018. EY further invited the network of EY Entrepreneur Of The Year™ alumni from across the globe to take the survey. The survey was available in English and six other languages. Further in-depth interviews were carried out during March-April 2018 to provide additional specific insights. 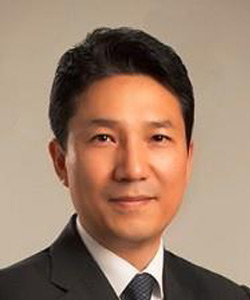 South Korea’s middle market is ahead of the pack in its ambitions for growth. More than one-third of the country’s business leaders are targeting growth of over 10% this year, far above the International Monetary Fund’s 3% growth forecast for the country,1 according to the EY Growth Barometer survey.

This chart shows growth expectations for 2017 and 2018, ranging from negative growth to growth above 50%, including year-on-year percentage point changes. 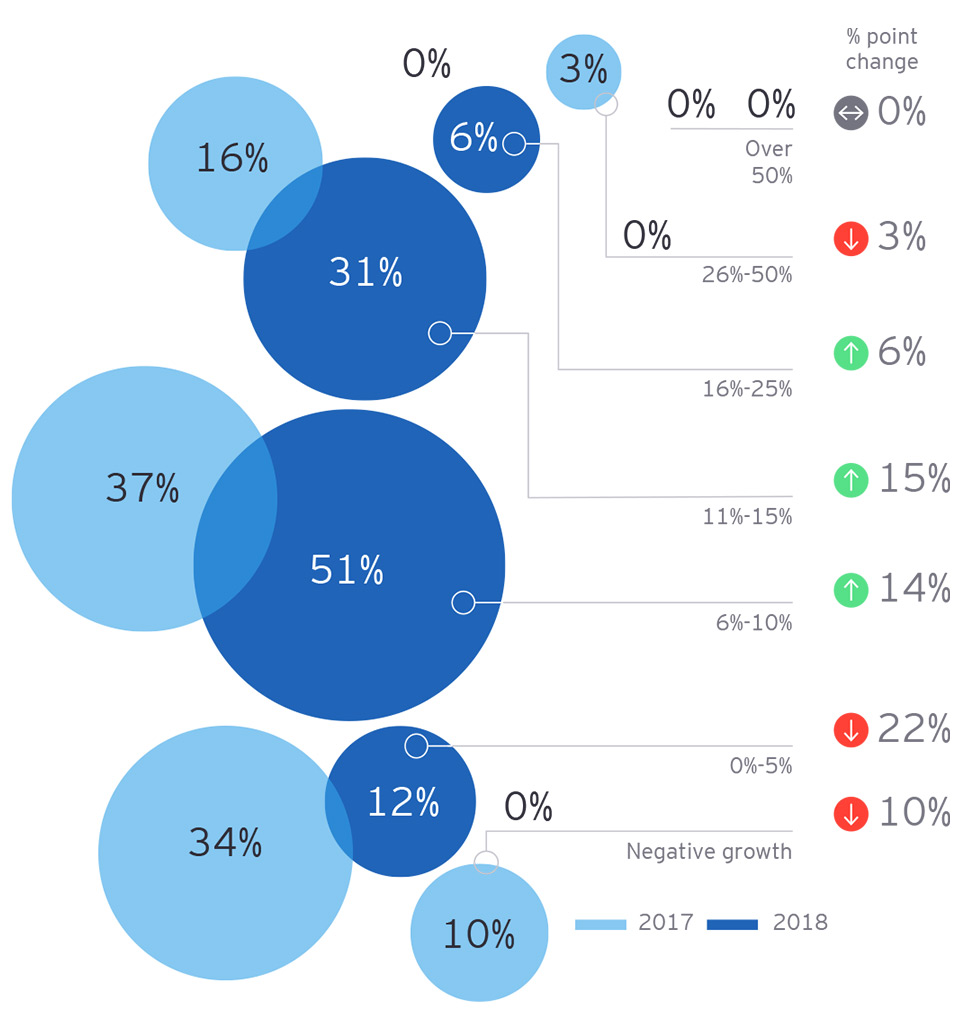 As the much-anticipated geopolitical tilt from West to East becomes a reality, South Korea’s percentage of high-growth companies (37%) places it well ahead of the more developed economies of Europe (29%) and the US (11%). And, globally, its predicted growth rates put it in an impressive seventh position.

South Korean companies are setting their sights on expansion offshore. Entering a new overseas market is their number one priority – cited by 31%, compared with 23% in the rest of the world. And when it comes to evaluating business opportunities, identifying an overseas market is again the top factor, cited by 28% of respondents. “With South Korea's enormously export-focused market, it’s not surprising to see this very outward-looking bias,” comments Nam Su Park, Korea Growth Markets Leader, EY. “It has been this way for many years.”

After international expansion, the South Korean C-suite’s broad growth plans give equal priority to M&As, domestic growth, and expansion into an adjacent business activity or sector, with the latter reflecting rising industry convergence.

In another sign of their robust business confidence, more than three-quarters of South Korean companies (82%) are planning IPOs, compared to 44% across the rest of the world.

Reflecting their international ambitions, slow/flat global growth is the greatest external risk to growth, cited by almost four out of ten (39%) respondents. In contrast, slow/flat local growth is a concern for just 12%. Unsurprisingly, given the long-running tensions with North Korea, geopolitical uncertainty is a bigger issue for South Korea than for the rest of the world, at 14% versus 9%. However, with geopolitical uncertainly still cited by far fewer business leaders than those who highlight slow/flat global growth, it seems it is only considered a real problem if it affects sales.

This chart illustrates company leaders’ ranking of the key macro risks to growth. 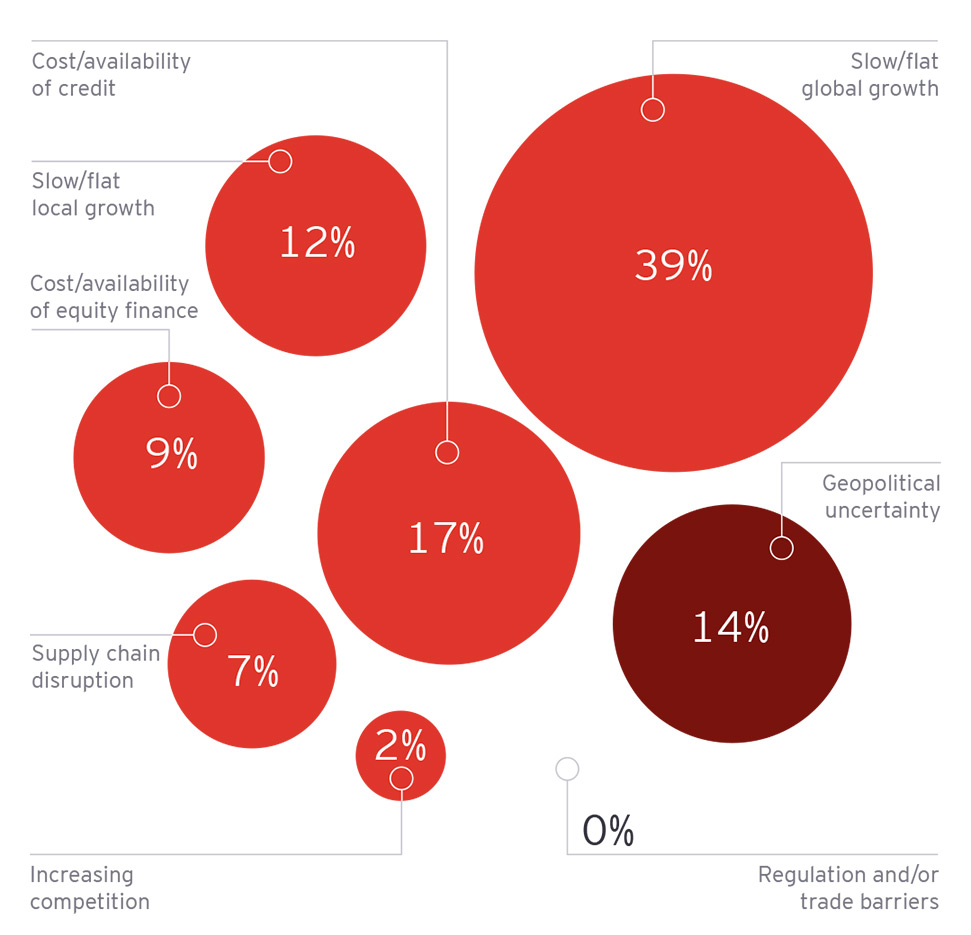 The squeeze on cash

When it comes to operational growth challenges, insufficient cash flow is a major factor – cited by nearly half (49%) of South Korean C-suite leaders and 34% elsewhere. Although this is likely to mirror rising labor and raw material costs and taxation policy, it may also reflect the changing nature of sales patterns worldwide. As industry convergence, unpredictable online buying patterns, and the need to invest quickly to satisfy changing consumer demands all coalesce, there is increasing demand for ready money.

As industry convergence and rapid digitization transform the world of business, South Korean middle-market companies are evolving to keep pace. A striking 97% plan to adopt artificial intelligence (AI) within the next five years. This dramatic turnaround from last year – when 84% said they would never adopt robotic process automation – illustrates the tremendous speed of change in all sectors.

TMON, one of the largest e-commerce platform, is one company that is eyeing AI. “One of the technologies we are most interested in is AI, and in particular how we can integrate AI into our technology platforms to personalize the service we provide to our customers,” says TMON’s CEO Andy Ryu.

Beyond AI, South Korea has been quick to see its potential as an enabler. Technology is considered the number one factor in boosting productivity, cited by more than one-third (36%) of respondents – 25 percentage points up on last year and well above the figure of 27% elsewhere. Improving process efficiencies – a traditional role for IT – is the main objective of tech investment for nearly one in three (30%), although the more mature purpose of improving the customer experience is close behind at 28%, up six percentage points from 2017.

As company leaders embrace AI and other advanced IT, reliance on technology also increases risk: technological disruption is the second greatest operational challenge to growth (17%) after insufficient cash flow in line with the rest of the world.

This year, for the fifth consecutive time, South Korea topped the annual Bloomberg Innovation Index, which scores countries against seven criteria, including R&D spending and patent activity.2 In the middle market, the main factors driving this innovation are profitability and regulation. Profitability ranks first, cited by 42%, up 24 percentage points from 2017; this is likely in part to be a response to the pressure on cash flow. Regulation is second, cited by 37%, up 13 percentage points since 2017, showing that regulation is no longer associated with stifling innovation.

This chart shows companies’ key drivers of innovation within their business. 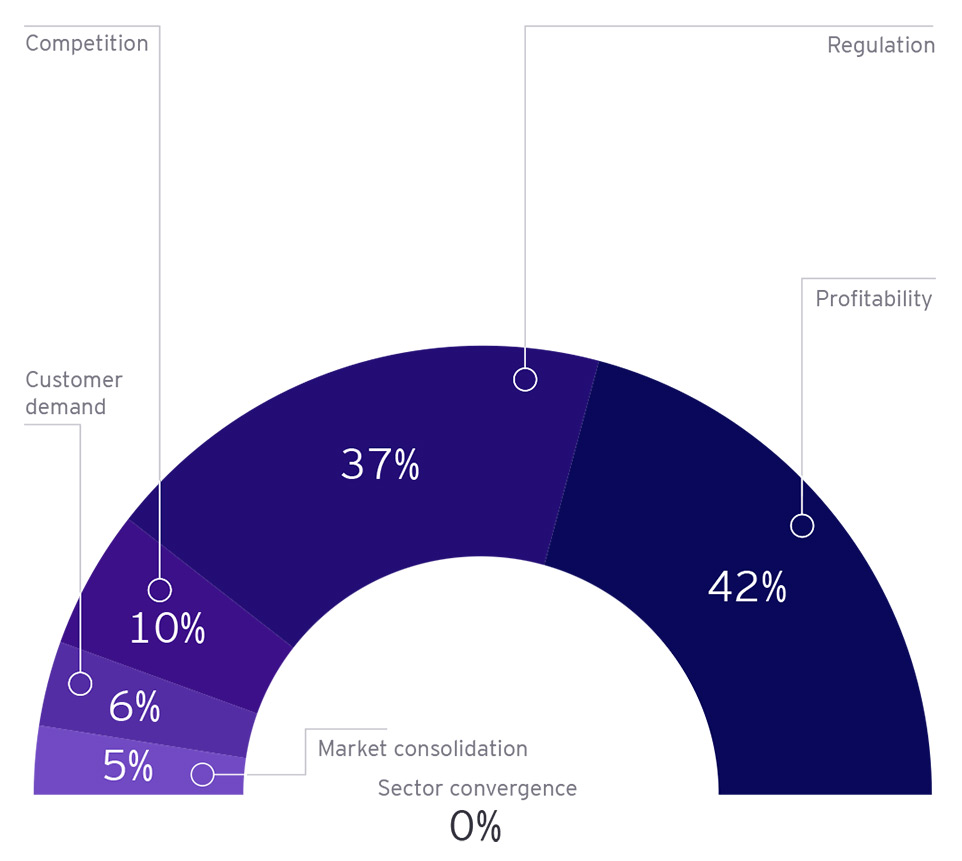 Growing companies need to expand their headcount, and around one in two South Korean business leaders (51%) plan to hire more full-time staff. In line with the rise in confidence over the past 12 months, this figure is up 30 percentage points, with just 13% intending to keep current staffing levels, compared with 35% elsewhere. Gig working is down sharply, as globally. “In part, this shows the effect of government policy on business,” says EY's Nam Su Park. “The government's labor reforms encourage companies to hire full-time staff, convert part-time to full-time and reduce the use of contractors.”

When it comes to what companies want in a recruit, diversity has shot up the middle-market agenda. Two-thirds (69%) of business leaders name more diversity as their number one strategic talent priority – up a huge 61 percentage points and far above the 40% figure elsewhere. This may be because South Korea ranks 118th out of 144 countries in gender equality, according to the World Economic Forum, largely due to women’s low participation in the economy.

Capabilities are also highly valued: talent with the right skills is cited by 23% of executives as the key accelerator of growth, and for more than half (54%) the ideal organizational culture is one that attracts younger digitally native talent. However, despite the demographic shifts that – reflecting its aging population and declining birth rate3 – South Korea cites as its most disruptive global megatrend, no companies name lack of skilled talent as their greatest challenge to growth; elsewhere, this is cited by 13%. In fact, South Korea seems more in need of safe pairs of hands: 48%, compared with 40% elsewhere, say a wider and deeper pool of responsible managers would free them up to plan strategically.

Companies may not be worrying so much about skills because, like TMON, they are injecting the capabilities they need into their labor force. “One of the operating systems we have in place, known as ‘Third Eye’, helps us find the right talent and people who fit with our corporate culture,” TMON’s Ryu says. “The professional leaders who lead our businesses across various fields are working closely with our young workers to develop them and their expertise.”