Mature leader of the CEE region

Foreign companies play an important role in the Polish economy. They contribute a lot to employment, wage fund, generated value added, investments, exports and general government revenues. Companies with a majority share of foreign capital have in recent years often outperformed Polish public and private business entities, thereby being an important driver of the economic growth. In particular, foreign companies accounted for a vast majority of employment growth in the enterprise sector in Poland over the 2010-2015 period. In 2016, at the time of economic slowdown, foreign companies accelerated the growth of generated value added, exports and employment, significantly alleviating the adverse impact of other factors on the Polish economy. Importantly, in contrast to Polish private and public companies, foreign entities continued to expand their investment activity in 2016, though at a lower rate than in 2015.

Poland was the only EU country that avoided recession during the global financial crisis in 2007-2009. In terms of cumulative GDP growth in 2008-2016, amounting to 32.4%, Poland ranked 3rd among EU Member States. The outstanding performance of the Polish economy has increased its attractiveness as an investment destination. 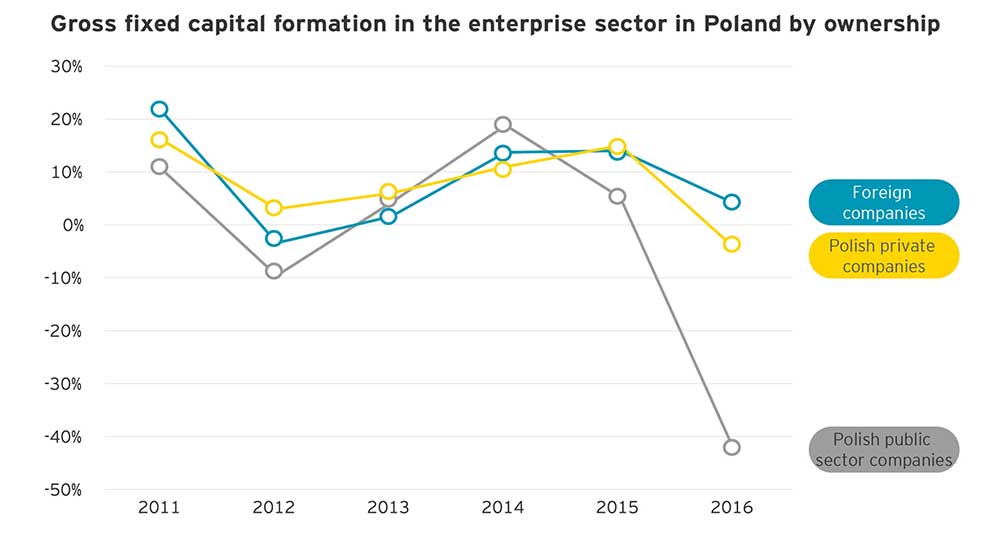 Number of FDI projects and jobs announced in Poland

One of the most attractive destinations in Europe

The findings of the EY European Attractiveness Survey indicate that, when approximated by the number of announced investment projects, Poland seems to be one of the most attractive locations in Europe for foreign direct investors. In 2016, international investors announced their intentions to carry out 256 investment projects in Poland, compared to 211 projects in 2015. This ranked Poland 5th among European countries in terms of the number of planned projects – achieving anadvance from the 6th position (ex aequo with Belgium) in 2015 and the best result since 2008, when Poland also ranked 5th. Naturally, the number of planned investment projects depends on the local market capacity, in particular, the availability of labour.11 However, the fact that Poland regularly stays ahead of economies such as Russia and Turkey in terms of international investment projects proves that Poland’s appeal to foreign investors is high.

In 2016 the growth rate of the number of FDI projects located in Poland was higher than in Europe as a whole. As a consequence, in 2016 Poland was the location of 4.4% of all FDI projects announced in Europe, which indicates the third consecutive year of increase in Poland’s share in the total number of foreign projectsin Europe.

Based on data available for 55% of projects, international investors planned to create at least 22 thousand new jobs in Poland. While the exactcounting of jobs is challenging (and the job data coverage is not complete), the increase in announced new jobs by foreign investors in Poland between 2011 and 2016 (over a twofold increase) provides additional evidence that the trend in internationalinvestors’ activity in Poland continues to be positive. Relative to other European countries, the number of FDI-related jobs announced to be created in Polandin 2016 was the second highest, only next to the UK. The position of Poland in this ranking has been relatively stable (among top 3 countries) since 2004,with only two exceptions: in 2009 and 2011, when the country was beyond the podium. 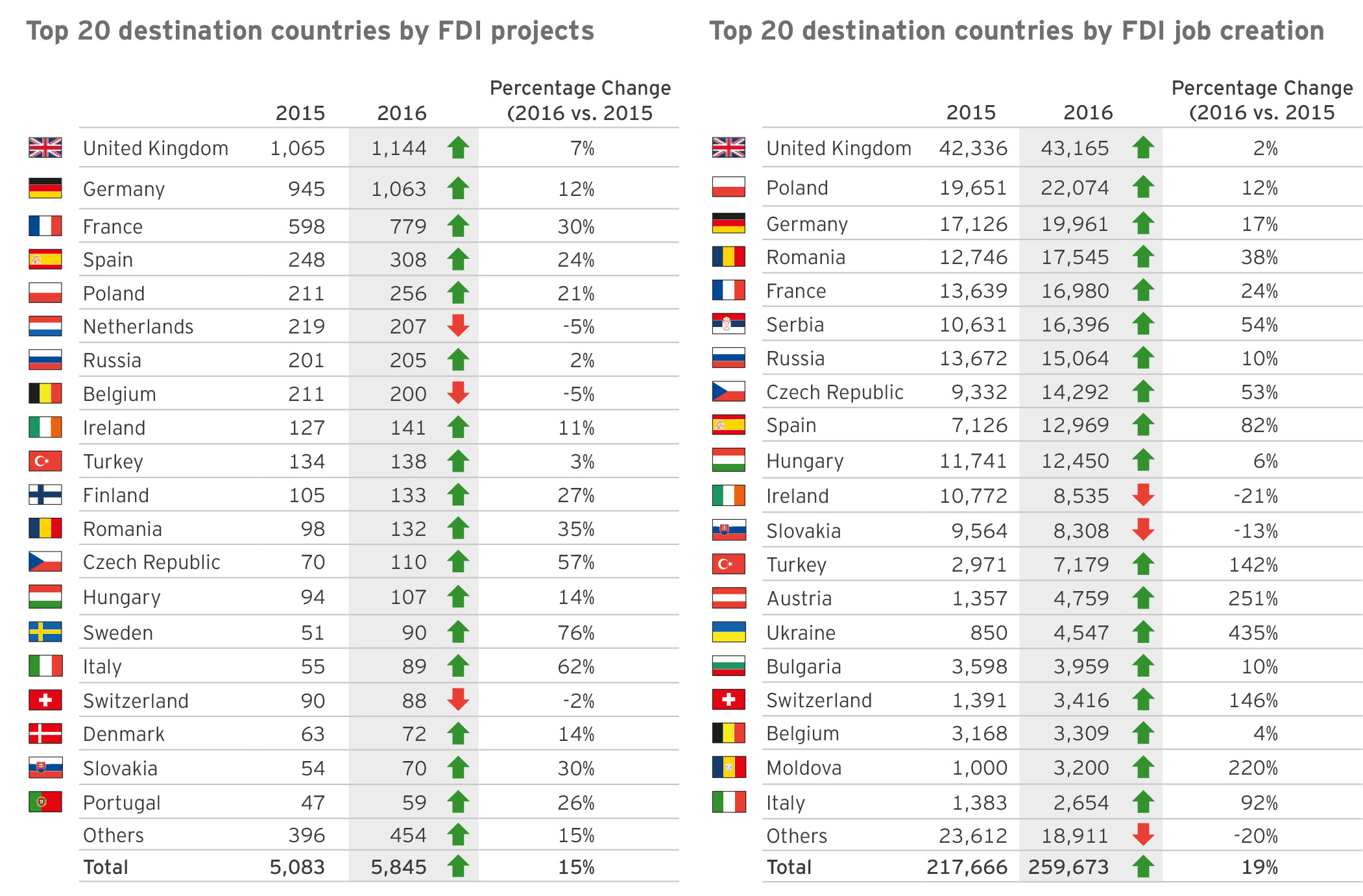 According to the surveyed companies, Poland’s attractiveness as an investment destination improved slightly in 2016 – 29% of respondents indicated that it had improved while 24% of companies claimed that it had deteriorated last year.

Looking ahead, 48% of foreign investors expect Poland’s attractiveness to improve over the next three years. That share is only lower than the respective proportion for top performers: Portugal and Netherlands, while it exceeds the resultsobtained for other European countries analysed.

To what degree do you think Poland's attractiveness evolved over the last year/will evolve over the next three years? 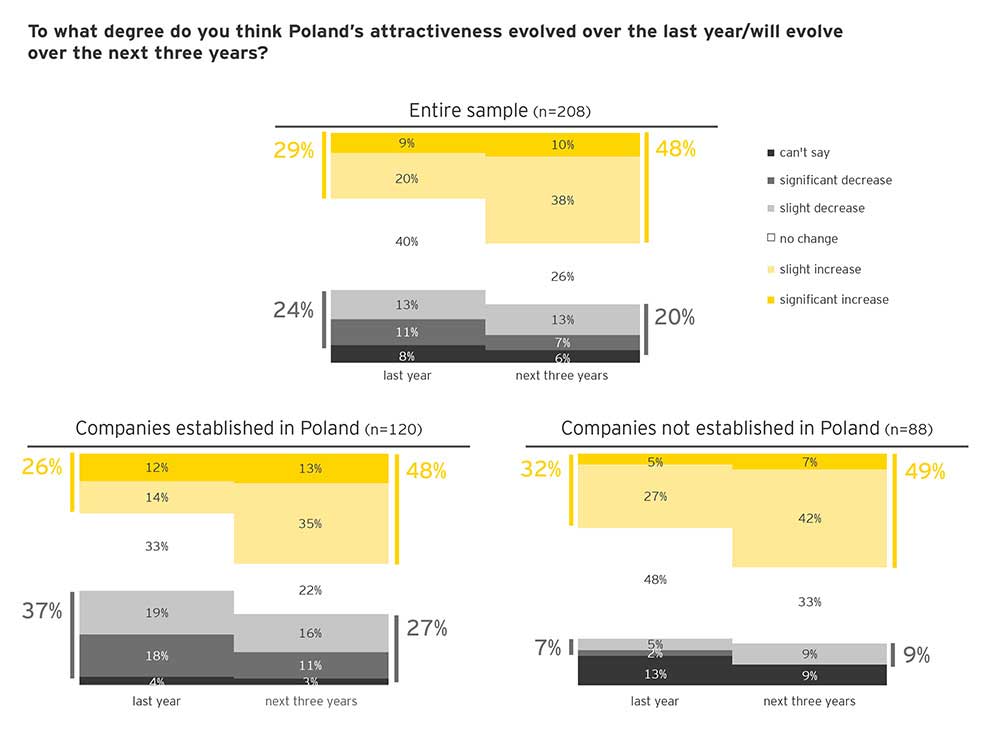 When considering Poland as a potential investment destination, foreign investors appreciate in particular the structural advantages of the labour market in Poland. Over 70% of surveyed companies’ representatives indicate that Poland’s labour skills level, the potential for productivity increase and labour costs are very or fairly attractive. The same factors are also most frequently listed as Poland’s key assets in comparison to other European countries.

Foreign companies established in Poland distinguish Polish workers’ skills level and the potential for productivity increase as attractive much more frequently than companies not present in Poland, indicating these two factors in 94% and 87% of cases, respectively.

Both the companies which operate in Poland and the firms which have not yet established their presence in the country agree that labour costs are one of Poland’s major assets when compared to other European countries. However, we identified large discrepancies between those two types of investors when it comes to their assessment of Polish labour force skills level and the potential for productivity increase. Foreign companies already operating in Poland consider those factors as key assets of Poland relative to other European countries. However, these advantages are much less frequently recognized by companies which do not function in Poland. It may signal the need to put more emphasis on the communication of the strengths outlined above to the companies not yet established in Poland.

From the point of view of your country, Poland is very, fairly, little or not at all attractive as a foreign direct investment destination? 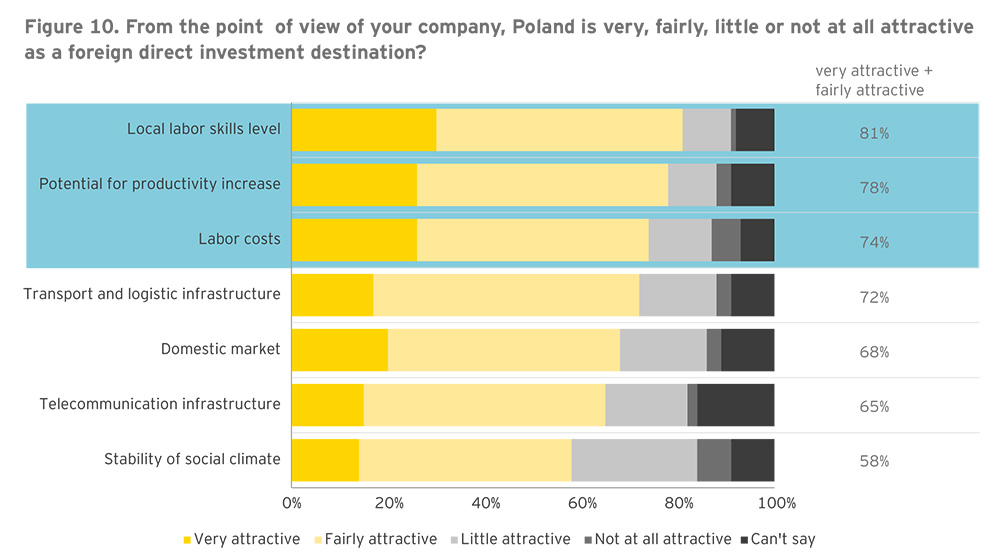 What are the three key assets of Poland compared to other European Countries? 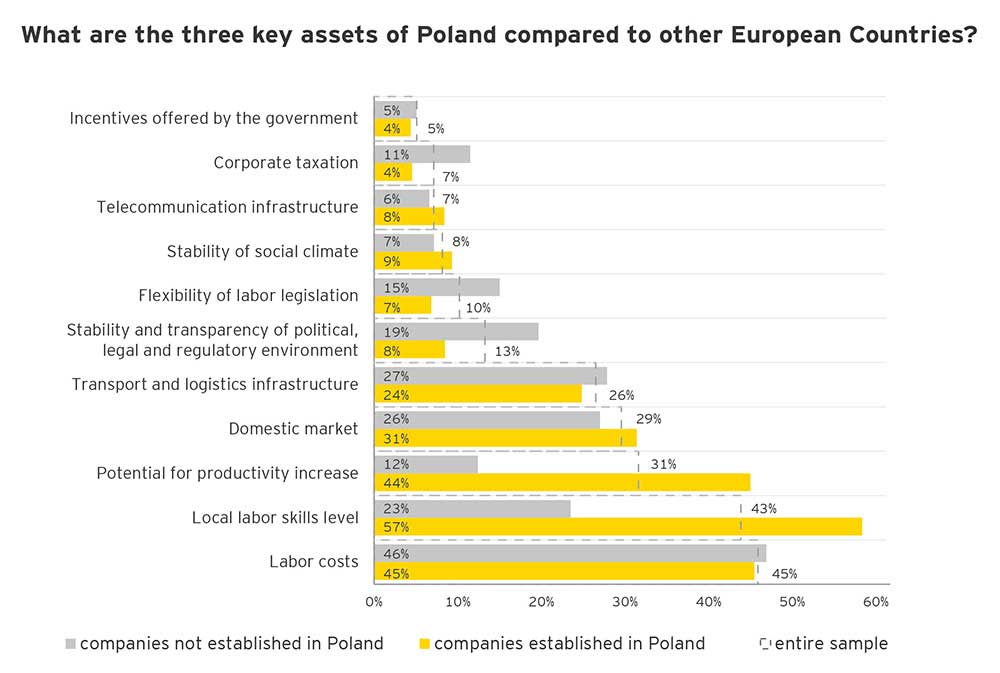 Traditionally, Central and Eastern European countries have been competing with Poland for foreign investment. The results of the Poland’sAttractiveness Survey confirm this common knowledge, additionally listing Germany among Poland’s main competitors.

The position of the Czech Republic as that of Poland’s main competitor for FDIs is shared by every group of investors considered16. Still, a higher share ofcompanies established in Poland (50%) is of such an opinion than in the case of enterprises not present in Poland (35%). Significant differences between thesetypes of investors have also been identified in their perception of Slovakia (15% and 3%, respectively). Hungary, in turn, is indicated as Poland’s main competitor more frequently by investors from the USA (28%) than by investors from Western Europe(7%).

In your opinion, which is Poland’s main European competing country in terms of attractiveness? 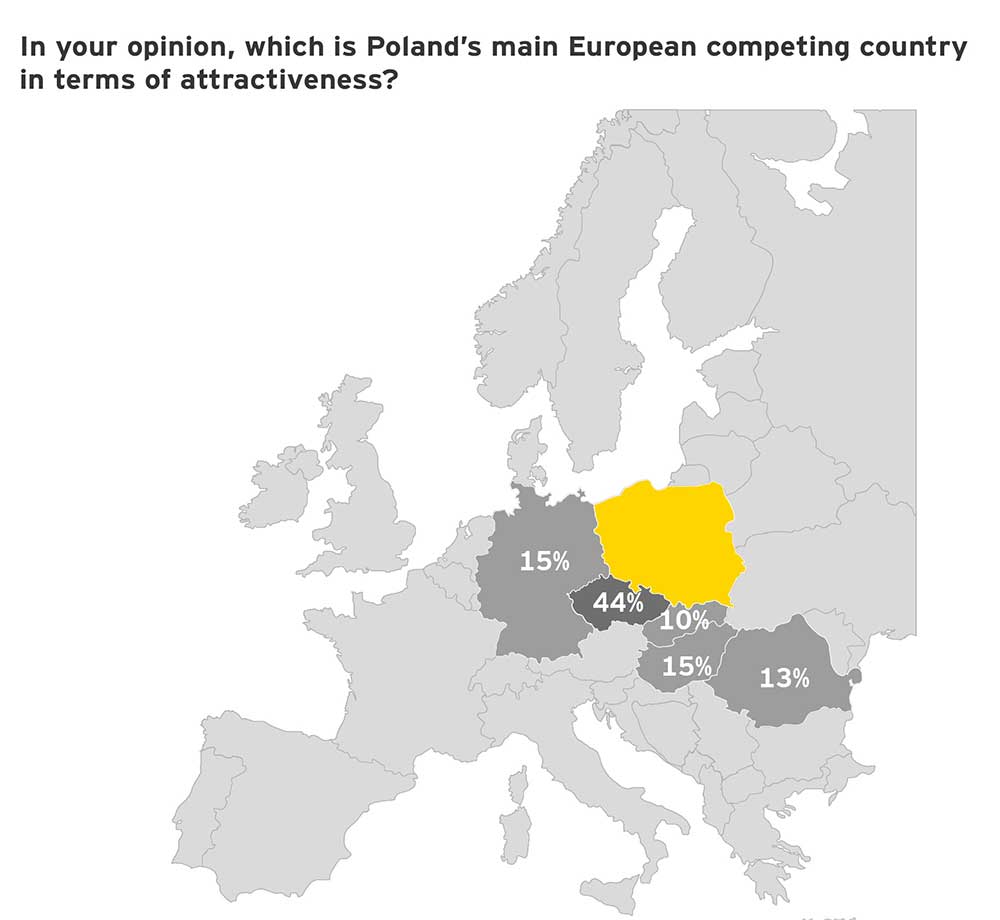 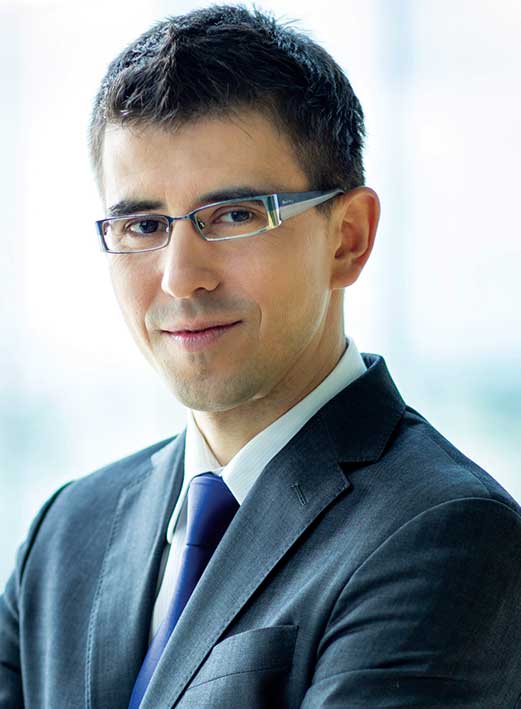 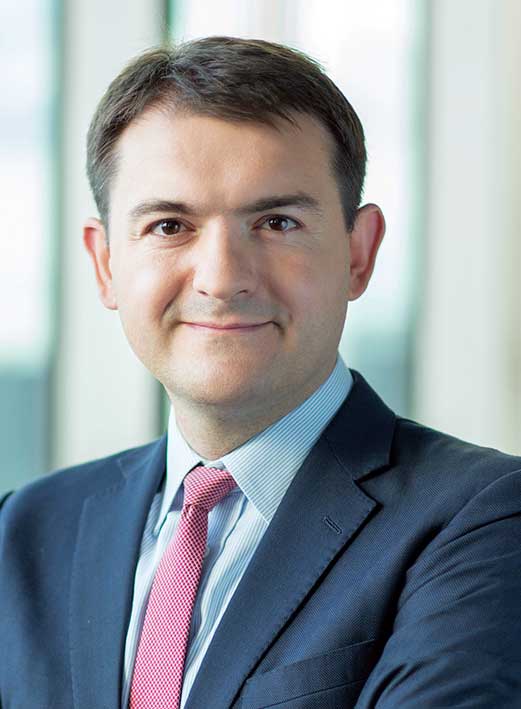